One of the best comedy-drama films ever made is The Breakfast Club. I must have first watched it at university back in 2007 maybe, but it stayed as one of my favourite films. 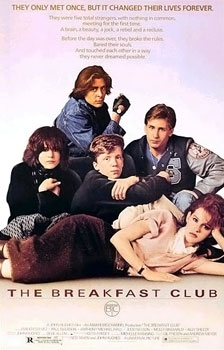 We all know the charming story of five high school students on Saturday detention – each of them their own stereotype and completely different from the other. The charm comes from how harsh the realities of adolescence are and their awareness of this brings them together. It works so well as a piece of drama, utilising the serious subject matter of depression, suicide, and peer and parental pressures but it couldn’t possibly work as well without the humour. The characters of The Breakfast Club are all stereotypes and this is emphasised in the trailer and movie poster. They are the brain, the athlete, the basket case, the princess, and the criminal.

They say that, in high school, you’re one of the five Breakfast Club characters (or you can mix them together). I used to say I was a mixture of the brain and the basket case because I was the lame nerd in high school and also the weird one who pretty much didn’t like anyone else. However I think the criminal, played by Judd Nelson, is the best character, and later in my life I began to relate more to him than the others. Not that I was a criminal per se, but that his own problems seemed the most realistic to me, I felt that he had more to give and he was the most real character by far.

There’s an incredible scene where Bender (Nelson) begins acting out a scene about what it’s like at his home. This comes about from his own doing. He’s already been bullying the others, trying to be a tough guy with the other tough guy, Andy (Estevez), picking on Brian for being a nerd, and alluding to the lack of sexual experience of Claire (Ringwald), the popular girl who is normally known for being sexually experienced. It’s as though Bender is building up to the point were Andy asks him, ‘What about you?’ If so, we can see the irony here from one of the two characters who don’t want to talk about themselves (the other being the basket case, Ally) subsequently bringing the subject matter over to himself. An obvious skill of someone who doesn’t want to talk about their personal life.

‘You forgot ugly, lazy and disrespectful – ’

Bender is victim to the fundamental attribution error. Coined by Lee Ross in 1967, it is the theory that we explain someone’s behaviour by crediting either the situation or the person’s disposition. Because he comes across as an aggressive bully, everyone supposed that was his disposition, not taking into account his life at home. This is something incredibly secret to him – his pride is at stake and the only way to live past the abuse he experiences at home is to act out aggressively just so no one suspects what he’s going through. For someone like Bender, it would be a sign of weakness to reveal his torment, and so he hides it away, thus becoming that which he despises.

Andy is the other dominant male of the group. The athlete who is seen as unintelligent yet attractive and cares only about sports. He has high social status and is the envy of many of his peers. However, like Bender, he too has father issues. Everything he has done and achieved has been through his assertive father, experiencing a mental abuse rather than physical. I found it interesting in the scene where they’re talking about what they did to get detention and Andy had ‘taped Larry Leicester’s buns together.’ They laugh because it’s funny to imagine, but there’s a different tone to Brian’s reaction, ‘That was you?’ and then Andy reveals that when they tore the tape off his bum cheeks, it tore some skin off too. It’s not funny anymore. Andy sounds like a bully but he says he only did it because of his father. ‘I did it for my old man. I tortured this poor kid because I wanted him to think that I was cool.’ Technically, Andy isn’t the bully, his father is.

I know a number of people who have father issues and I, myself, have experienced how a father can easily turn into a bad role model. My father died in 2008 but I understand the oppressive nature the dominant male can have on another male. Or even a female. We strive to do right, we strive to please, but somehow it’s never good enough. What I dislike about Andy is his weakness in doing what he’s told. What I love about Bender is how he argues back, and even though it changes him negatively, I think it still motivates him positively. I like this strength in him, that he can keep going even through all this mental torture. Freud’s technique of psychoanalysing involves us asking Why is it we hate that certain thing? It is normally because we hate that about ourselves and therefore hate it in other people.

Claire is similar to Andy in a way, due to their social status. Claire is a product of reciprocal determinism, as coined by psychologist, Albert Bandura in 1986. It states that a person’s behaviour is influenced by personal factors and social environment. Since Claire’s parents are divorced and use her as a weapon between each other, her sense of self-worth drops and leads her to seek approval from her peers. Her own thoughts are affected and she steps up on the social ladder as someone who is beautiful, sexually experienced, rich, powerful and popular. The only reason she’s in detention is because she skipped class to go shopping, now sucked into this whirlpool of social status which, to her, is completely normal.

Ally is juxtaposed to Claire, being the other female and yet being so unpopular she doesn’t even speak to anyone. She is is so illusive we hardly know she’s there as the other characters interact. She makes mumbling noises now and again and interacts only through actions, such as making a crisp sandwich. Her first line doesn’t even come until 33 minutes into the film. ‘Vodka,’ she says, when Andy asks what she drinks. Like Bender, she’s one of the most interesting as she doesn’t talk about herself like the others do. At home she is ignored by her parents and in school she has no friends. From this we then understand why, then, when they confess what they did to get detention, Ally states she did nothing. That she had nothing better to do. 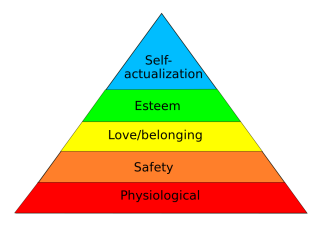 If we look at Maslow’s hierarchy of needs – physiological, safety, love/belonging, esteem, self-actualisation – she’s met the first two and is now looking for love and belonging. She came to make friends. Or simply, to belong. Ally holds a power over them all in this case, knowing they did something wrong while she didn’t. She’s playing them like a game, which is why she acts as a compulsive liar. It’s fun for her.

Brian was the one I originally associated with myself before I thought more of Bender. Brian, too, has harsh pressures from his parents which are down to doing well in school. This forced ambition of academia means the only thing important to him is studying and getting good grades. Brian is intelligent but socially and physically awkward. He has sacrificed social status for good grades and is now at the bottom of the social ladder. Seen as shy and unattractive as well, he faces pressures from his peers who rank higher in status. However, he is actually similar to Ally. Where they are both low in social status, she cares less about this and he lacks understanding. A lot of the comedy comes from Brian’s naivety, which is more laughing at everyone else for succumbing to the pressures of high school, while Brian is free from it completely. But Brian had brought a gun to school, intending to commit suicide. The look on the other character’s faces says it all as Brian is the least likely to have a gun. You can see their realisation that not everything is how it seems. This heavy-hitting drama is at the core of his character, he wanted to die. He wanted to kill himself over an F in Shop class. It just shows how little this means to the others, it means everything to him. When it’s revealed it was a flare gun that went off in his locker, they laugh. They laugh at the ridiculousness of not knowing what a handgun looks like. The tone lightens. He wanted to kill himself, changed his mind and it still went wrong. They can only laugh.

What’s important to understand is that as each of them come closer together and their differences are emphasised, they all realise how similar they are to each other. What means the world to one means nothing to the other, but they all face some kind of peer pressure. I think the confession scene is the most important in the film. The tone is serious and they are calm and paying attention to each other. They’re sat in a circle so they’re all facing each other. Finally, someone is listening and paying attention to them.

When Andy says this about his father, it seems the strongest indication to how they all feel:

“It’s all because of me and my old man. God I fucking hate him. It’s like this mindless machine that I can’t even relate to anymore. ‘Andrew! You’ve got to be number one! I won’t tolerate any losers in this family! You’re intensity is for shit! Win! Win! Win!’ You son of a bitch.”

Again, the tone is lightened when Bender says, “I think your old man and my old man should get together and go bowling.”

The Breakfast Club is a highlight of social pressures and individual stereotypes. It’s a revealing film of how difficult life can be for anyone for whatever reason. It produces both comedy and drama to portray teenagers coming to terms with who they are as people and to emotionally absolve themselves from the guilt and torment handed to them from their parents and peers. The moral is simple. To not judge others because they’ll be going through something as tough as you are, everyone’s parents are assholes, and to stay physically and mentally strong to reach a self-actualised state so you can be happy in who you are. 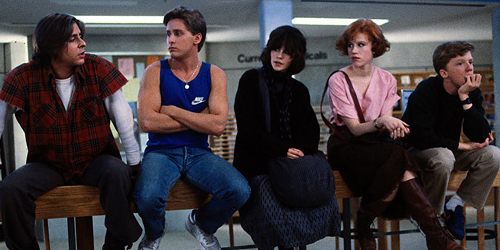