I was reading Paul Muldoon’s poetry recently, specifically Why Brownlee Left, and I was taken aback by how much sense they seemed to make to me. Like most poetry –  or like any kind of art – it can be hit or miss, depending on the reader since it’s all subjective. But there was something enjoyable about his poems that had the voice of less a stuffy poetry professor at Princeton rather as an unprejudiced humanistic voice straight out of rural Ireland. 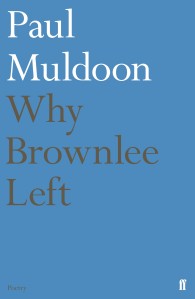 Muldoon was the son of a farmer and a schoolteacher, and grew up on a farm in County Armagh, outside a village called The Moy in Northern Ireland. He spoke of where he grew up as:

‘It’s a beautiful part of the world. It’s still the place that’s ‘burned into the retina’, and although I haven’t been back there since I left for university 30 years ago, it’s the place I consider to be my home. We were a fairly non-political household; my parents were nationalists, of course, but it was not something, as I recall, that was a major area of discussion. But there were patrols; an army presence; movements of troops; a sectarian divide.’ (The Poet at Play, The Guardian, 2010).

I’ve been fascinated with why the Irish make such good poets. What is it on the Emerald Isle that speaks to them in such a way as to form poets? It’s a mix of the beautiful countryside which contains the idyllic setting for any poem, and war.

Poet, Bernard O’Donoghue, said of Muldoon, that he was one of the first writers to be published during The Troubles. He was essentially a ‘Troubles poet.’ For 30 years, between 1968 and 1998, Northern Ireland went through an ethno-nationalist conflict where over 3,500 people were killed. Because it had also been called an ‘irregular war’ or ‘low-level war,’ there was chaos which affected all of the Irish people, which can be seen in many pieces of literature, as well as Muldoon’s poems.

Brownlee is the classic image of Irish literature of the farmer with his plow. But in Why Brownlee Left, Muldoon writes about this image sans farmer. Although contrary to the title, we don’t actually find out why he left, just the fact that he is gone. I think this single image, and subsequent description of his absence, serve as the idea for the world without us. Without humans. The poem implies that the world will still exist regardless of us. Owing to the vanity and arrogance of our individual egos: that we’re more than we are.

‘Why Brownlee left, and where he went,

Is a mystery even now.

It was him; two acres of barley,

One of potatoes, four bullocks,

A milker, a slated farmhouse.

He was last seen going out to plough

On a March morning, bright and early.’

This is the opening of the poem, and it immediately implies the mystery of his absence won’t be resolved. Brownlee ‘should have been content’ is the voice of the people around him, those who knew of his arrogance and how he was never happy with what he had. It’s that soul-searching, looking for meaning, seeking out something better, when through this life, he was never happy because he never stopped to look at what he had.

‘The act of pursuing non-material dimensions of an event that seems to be lost but which still bears upon the past and the present and the future, brings into question the understanding of such terms as origin and identity, emigration and becoming.’ [Source] 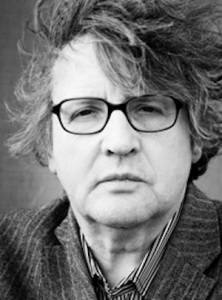 Brownlee himself is described as a myth: ‘He was last seen’ and ‘They had found all abandoned’. It’s like a man more than man, a legend, or even a fictional tale. Something that once was. The idea of history and time, and how things are ever-changing. In that respect, Brownlee could be any one of us, with the idea of our future generations looking back at the mystery of us.

Even the idea that Brownlee leaves in March, early spring, suggests that he has a future ahead of him. The optimism to choose to leave, seeking out a new life elsewhere. But what Brownlee had: ‘two acres of barley, / One of potatoes, four bullocks / A milker, a slated farmhouse,’ suggests he had it all, to a certain extent, with regard to his small rural upbringing. But to move on from the known to the unknown is an act that is either brave or reckless.

The Irish poets interest me because I find that they’re able to pick up on this dichotomy of beautiful and terrible nature. Muldoon being a ‘Troubles poet’ meant he would have experienced violence and death and political unrest on his doorstep. The very idea that Brownlee would just up and leave without a word begins to make sense.

I think even now, April 2020, with the current worldwide pandemic of Coronavirus (Covid-19), many countries around the world have gone into lockdown, people staying at home until the spread of the virus has petered out. There are numerous photos in the news of major cities now empty. It’s a strange and eerie sight, one that almost doesn’t make sense, as if it’s fiction, something we’ve seen only in films or in a book. But how the world is left, as Brownlee left it, it’ll still be there when we come back. There’s something beautiful in the idea that the world is indifferent to us. It humbles you. When we’ve come into contact with such societal anxieties, it feels like we can step aside and take a breath and leave the world alone for a while.

I imagine the poem Why Brownlee Left as a painting. The farm left alone, the plow left in the middle of what it was doing. There’s something eerie about our world left as it is but without us. It’s almost as if the world needs us, but it doesn’t, not really. The world will carry on without us, and nature will take over. I think the poem is about how we can always strive to become more than we are, but the natural world won’t take any notice.