I can’t remember the first horror film I watched, but I remember I did watch a lot of them when I was younger. My mother seemed to enjoy them back then – my parents were okay with me watching them, they didn’t think I’d be able to sit through them. But I did. I kept watching them. I remember the Sci-Fi channel used to have this horror segment at night called Sci-Fright. It showed a bunch of horror b-movies around midnight, the kind were nothing really happened until Bam! scary scene. One memorable scene was a woman who turned to the camera with red eyes. The whole eyeball, red. It terrified me. Even when we got Michael Jackson’s Thriller on VHS, the music video and the making-of. It was fun because I liked Michael Jackson but when he turned into a werewolf, I couldn’t cope. I hid behind a pillow, my hands shaking over my ears so I couldn’t hear. I felt marginally better when he was a dancing zombie, but again at the end with the yellow cat’s eyes, I was terrified. But there was something about watching those things that made me want to watch them still.

In an article on Psychology Today, according to a 2004 paper in the Journal of Media Psychology by Dr. Glenn Walters, the three main factors which make a good horror film are tension, relevance, and unrealism. Which is to say the suspense, shock and gore would provide good tension mixed with how it’s relevant to us as viewers, or people. And what is unreal is that which we do not normally experience in everyday life.

I recently re-watched the Hellraiser films. I was a fan of the first one, even though the gory kind of horror film isn’t my cup of tea. I’m still impressed t

hat Clive Barker and Doug Bradley (Pinhead) are both from my hometown of Liverpool. Hellraiser offers a psychological terror – you open a puzzle box and some demons are coming to take you to Hell. End of story. Hellraiser, though, has rules and regulations, they’re like lawmakers. So, to begin with, it’s not just mindless killing. The sequel was also good. But it’s a shame the others were just random scripts with Pinhead dumped in there randomly. That’s the reason they’re not good. There’s no story, there’s no reason to enjoy it.

Similar with the Saw films. The first was excellent. Psychological torture as well as physical. The story tells us why and how it’s happened. And the end is brilliant. The other subsequent films are mindless deaths – fun ways to imagine killing someone, which is more difficult to enjoy. An exception to the rule is The Texas Chainsaw Massacre. Psycologically frightening, it results in the entire group dying, which is hard to enjoy. Dr Dolf Zillmann argued The Excitation Transfer, which is when we feel positive feelings when the hero triumphs. In some studies, people have found more positive feelings when the hero doesn’t survive. I would argue a depressive state of loss, as the empathy for the character’s loss is far too much, and we come away let down and, ultimately, sad.

Reading an article on the psychology of horror, Freud talked about the id, ego, and super-ego. (Id – primal instincts; ego – the ability to act rationally; super-ego – internal thoughts). Freud suggested our enjoyment of horror comes from The Uncanny – the suppressed thoughts from the primitive id. So really, when I was a child, scared of these horror films, I liked it because my primitive instincts were attuned to it. The horrifying actions are not something we now do in civilised society. We’ve inevitably evolved from it.

For me, probably the best scene in a horror film is in Nightmare on Elm Street where a girl in a white body bag is being dragged by an invisible Freddy Kruger down a school hallway. The legs are pointed as tho

ugh being pulled along, and leaving a streak of blood until she vanishes around a corner. I find this frighteningly fascinating. I’m drawn to how creepy it is. Even when she appears at the classroom door beforehand calling out ‘Nancy’. It’s utterly terrifying. However, what is it in my id – my primitive feelings – that would find enjoyment in this? Surely the only part of horror that my primitive instincts would enjoy would be actual scenes of murder. I suppose what Aristotle said about horror – that it acts as a catharsis – assumes each horror category allows us to release aggression.

I enjoy psychological horror films, those that are scary but thought is used and this often appears in films where there is a good story. Instead of gore, we’re allowed to think, sometimes experiencing the escalating madness of a character. The Shining, for example, 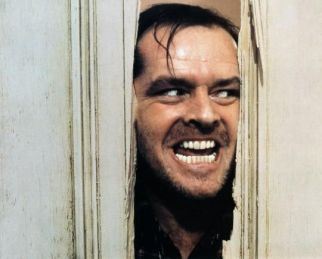 has Jack Torrence slowly turn violently insane in the Overlook Hotel, attacking his wife and son. Like Jack, we can release our inner madness which exists in our id – the primitive instincts – but only through watching it, not in acting it. With Silence of the Lambs, we can watch the psychological connection between Clarice and Hannibal Lecter. There is less gore and more thought attributed here. The excitement and even curiosity to what we don’t normally perceive exist as our fascination with things out of the norm. The unrealism. Literally defined ‘a lack of realism,’ unrealism helps us accept that death, murder, torture, etc. exist here in a fiction, in a kind of nightmare – and it’s frightening because death and murder are real, but we’re shielded from it. And later we laugh about it because we experienced it and nothing happened.

Touching upon horror films concerning the devil or religion, these also play with the feeling of the unreal. Religion has existed for thousands of years and all the time assuming what happens after death. From an atheistic point of view, it doesn’t matter. So in films such as The Omen, The Exorcist, Rosemary’s Baby, or even End of Days, they treat biblical stories as just stories, which play upon the mind as a primal fear due to the unknown and the unreal.

I think the fear we get from horror films is something we can’t normally experience in everyday life. Sometimes it’s not just the blood and gore, but the idea that we can watch it as a way to release pent up aggression. They are a form of enjoyment of something that cannot normally exist, as our primal instincts desire it, but ultimately must be an exceptionally good film to watch.